The (BIG) Week That Was Roundup: End of May Extravaganza

I've been busy riding and not following cycling too closely for the last week, so we have a lot to catch up on here at Espoirs Central. Lots went on during my little sabbatical so let's get right to it.

You read that right folks...Jonathan Vaughters and Garmin-Sharp have made another huge signing for 2014 by coming to agreement with Danish Olympic Omnium Gold medalist Lasse Norman Hansen. This is the 2nd huge neo-pro signings for next year after the American squad signed Rabobank Development rider Dylan van Baarle penned a contract with the team.

Having struck gold with his pursuit and overall track cycling abilities, Hansen's abilities on the road might have been over looked by many. A prodigious junior talent that was a huge success on the tarmac and boards, Hansen has spent a large amount of his efforts as a U23 focusing on the track. Despite this, Hansen has accrued some nice results on the road. At 19, Hansen was Danish U23 champion over the likes of now Saxo-Tinkoff's Christopher Juul-Jensen and BMC's Sebastian Lander. Last year, Hansen was 4th in the U23 World TT in Valkenburg just a month after his Olympics triumph.

After medalling twice at track world's in Minsk to start off 2013, Hansen turned his focus to the road with his Blue Water Cycling Team. Hansen started off with a breakaway win at the GP Herning and 10 days later, he got into the final breakaway at the Rund um den Finanzplatz Eschborn-Frankfurt and took out the final sprint of four. Hansen then won the Tour de Berlin TT and finished 3rd overall in the flat stage race while his teammate Mathias Møller won the overall.

Hansen could go many ways as a rider. Obviously, his time trial skills make him a prime candidate for shorter stage races with a TT. He goes well in harder one-day races and has a good sprint as well but he does have weakness in really hilly stages and he isn't the most consistent rider, day after day, in terms of his form. Hansen has put on muscle due to his track riding and if he were to lose this weight, he could see benefits in his climbing skills that could make his stock rise high. In any case, this is another steal by Vaughters and co. in the early stages of the 2014 transfer season.

For a team that's future was not even secured coming into this season, Miguel Madriaga's Euskadi squad has been on an absolute role of late and this time, it was Jon Larrinaga who took his turn on the podium with an outstanding overall victory in the Tour de Gironde, a 4 stage race that went in and around the department of Gironde where Bordeaux lies. As this is Bordeaux, sprints ruled.

-Stage 2 saw the big race shakeup with Euskadi taking the race by the scruff. On a day that was rather straightfoward and should have been a massive sprint, it was Jon Larrinaga who attacked the stage and caught the peloton napping on the run in into Audenge. Larrinaga kept a 19 second gap to the line for his 1st professional win while behind it was Sylvain Pandelé (GSC Blagnac) took the field sprint over Olympia's Tour KOM winner Johim Ariesen (Jo Piels) and Alexander Maes (Soenens).

-Stage 3 was the hardest stage of the race with rolling terrain that broke the race up a bit. Former Belgian junior TT champion Matthias Allegaert used his TT skills to his advantage and took a solo win over a charging Nick van der Lijke (Rabobank Development), Geert van der Weijst (Jo Piels) and Diego Ochoa (4-72 Colombia). Race leader Jon Larrinaga stayed in the main peloton and kept his lead by 9 seconds over Allegaert.

-Stage 4...well I told you this was Bordeaux so what do you think happened? Sprint. Duh. This time is was van der Weijst taking the honors for Jo Piels over Maes and Alexandre Billon (Aubervilles 93).

On the overall, it was Larrinaga who kept his overall lead over Allegaert with a trio of Rabobank Development riders in van der Lijke, Rick Zabel and van Trijp.

Okay, maybe that headline was a little perfunctory but Toms Skujins is here to stay and as one of Espoirs Central's favorite riders, Skujins put in an outstanding performance in the Course de la Paix U23 (U23 Peace Race) to take an oustanding overall win.

The first day featured a split stage that included... 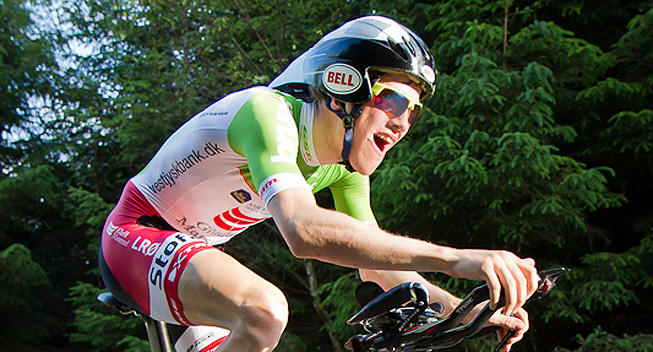 -A brutal uphill prologue with an average of over 8% in the town of Jesenik...Rasmus Sterobo (CULT Energy/Denmark) blitzed the 2.1 kilometer uphill prologue and took the win by over 8 seconds against fellow Dane Kristian Haugaard (Leopard-Trek) and Austrian Patrick Konrad (Etixx-iHNed).

-The afternoon stage featured a pretty flat stage from Jesenik to Bruntal that didn't feature many difficulties. It was a mass-sprint that ruled the day with Asbjørn Kragh Andersen (Tre-For) sprinting to the win over Daan Meijers (Jo Piels) and Lasse Norman Hansen (Denmark).

-Toms Skujins has been one of the brightest U23s that no one has really heard of. Perhaps it is because he is Latvian but for some reason, Skujins has been pretty consistent with the Latvian national team, La Pomme Marseille and now Rietumu-Delfin, a Latvian continental team. Go back through his results and you will see some impressive rides from the man from Carnikava including a 2nd in the U23 Ronde van Vlaanderen (2011), 6th in Paris-Tours Espoirs (2010) and 10th overall in this year's Glava Tour of Norway. Skujins is riding for a contract next year and his impressive ride on stage 3 of the Peace Race really put an exclamation on his resume. It was on the first mountain pass that the peloton split into two but it wasn't until 20 kilometers to go until the race really broke open. A group of four including Skujins, Jan Hirt (Leopard-Trek/Czech Republic), Luka Pibernik (Radenska/Slovenia) and Daniel Paulus (Gourmetfein-Simplon/Austria) broke away from the front group. In the end, it was Skujins bursting away from Pibernik in the end with Hirt and Paulus trailing shortly behind.

The peloton behind has let the break get too much gap and their GC chances were neutralized. Jan Polanc (Radenska/Slovenia) led the chase home by a 12 second margin over Etixx-iHNed teammate Julian Alaphilippe and Patrick Konrad, thus cementing his status as one of the best climbers of this espoirs season. With this stage being so decisive, the GC was played out nearly all by the stage results.


Lots else happened too...

That is all I have. I will try to be better about posting more frequently and you can always follow me on twitter (@Vlaanderen90) to get results, live coverage and plenty of snark. To be continued...