More than a Danish assault on the Scandinavian fingers happened this past weekend. Let's jump right in.

While no American teams were present at the U23 or Elite Men's Pan-Am Games (I know Jim Miller works on a tight budget and some scheduling issues so it is understandable), the racing from Leon, Mexico offered some nice insights.

In the U23 TT, Ignacio Prado (Mexico) improved on his 2nd place from last year to take the win ahead of Euro-based Sebastian Trillini (Argentina) and Chilean U23 TT Champ Jose Luis Rodriguez. The podium was within 15 seconds of one another and Prado averaged nearly 50 km/h on the flat course. Behind the podium, it was Brazilian Endrigo Da Rosa in 4th place followed by Vuelta de la Juventud sparring partners Jhonathan Restrepo (Colombia/5th) and Richard Carapaz (Ecuador/6th). Adam De Vos (Canada), who has been killing it on the American scene this year, finished in 7th at 1'25" back from Prado.

In the U23 RR, a breakaway of 8 separated themselves from the rest of the pack and that was basically all she wrote. Restrepo was attacking the breakaway a lot and eventually, he was joined by Rodriguez, GP Liberazione winner Lucas Gaday (Argentina), Carapaz and Colombian teammate Wilmar Paredes. Restrepo, winner of the 6th stage of the Vuelta de la Juventud out of a big breakaway, repeated his efforts from a few weeks ago and won the small sprint ahead of Rodriguez and Gaday.

In the Elite Men's race, the Canadian U23s in De Vos and Alex Cataford decided to toe the line and De Vos swung big and ended up 5th in the race, just 30 seconds behind winner Byron Guama (Ecuador). Remember this De Vos kid if you haven't already.

After a cancellation last year, the race in the north of France was back again for some some rather non-exciting racing. A breakaway of 14 got away and and proceeded to stay together for a small bunch sprint won by Robin Stenuit (Veranclassics-Ekoi). Best U23 was Adrian Legros (Chambery CF) in 7th.

Remember that last post about Loïc Vliegen taking his first UCI win of his career in the final stage of the Tour de Bretagne? He liked it so much that he followed it up with a win at the Fleche Ardennaise, his hometown race, in a small group sprint. The race kicked off the Thomas Vaubourzeix (Veranclassics-Ekoi) getting off the front with 50 kilometers to go and being followed shortly by Vliegen, Gaeten Bille (Verandas Willems), Laurens De Plus and Dries van Gestel (Lotto-Belisol U23), Sam Oomen (Rabobank), Alex Peters (SEG) and Dimitri Claeys (Verandas Willems).

With 10 kilometers to go, it was Vliegen getting off the front of that group with Oomen, Bille, Van Gestel and De Plus to form the winning move. Vliegen won the sprint over Bille and Oomen to take the win, which is the 3rd win in a row for BMC Development in this race. 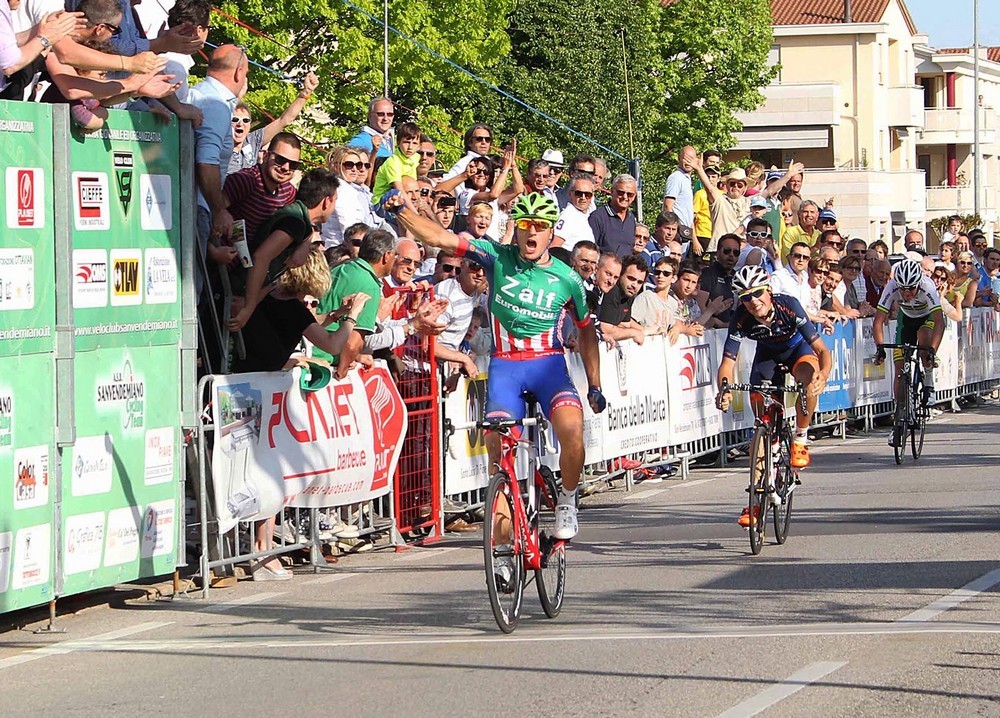 A quartet of four including Daniel Pearson and Nicola Bagioli (Zalf-Euromobil), Giovanni Carboni and Stefano Nardelli (Unieuro Wilier) that got 3 minutes over a circuit including Ca' del Poggio in the province of Treviso. They led over the the first three circuits but after that, the Australians slammed it to get them to the base of the climb for the 4th and final passage. Rob Power, who seems to be back to full health after slogging through the Tour de Bretagne, attacked and Gianni Moscon, one of the best Italians so far this year, latched on to him. They drove past the breakaway while Nardelli tried his best to get to terms with them.

While Power and Moscon led in front, Nardelli finally clawed back with 500 meters to go and proceeded to go straight past the lead duo to try and get a surprise win. The cheeky move nearly worked as Moscon and Power left it late and it was Moscon who had to jump out and was able to pass Nardelli to take his first UCI win and 4th win of the season overall. Nardelli hung on for 2nd while Power, who seems to be almost at full strength, finished 3rd.

Moscon took home the Challenge del Prosecco for the best overall finishes between the Trofeo Piva Banca, Giro del Belvedere and the Trofeo San Vendemiano. He keeps the trophy with Zalf-Euromobil for another year as Simone Andreetta won it last season.
Posted by Unknown at 6:00 PM