The last few weeks have shown that a boy from Lillehammer has some immense talent for riding on 2 wheels. Yet this is a rider that few English speakers knew anything about and even I, king nerd of the U23 realm, was sat scratching my head when Truls Engen Korsaeth nearly caught the duo of Alexander Edmondson and Gianni Moscon in the finale of the U23 Ronde van Vlaanderen.

I was a bit dumbfounded by Korsaeth as he continued to put in strong rides after attacking the finale of the La Côte Picarde and an all-around strong ride at the ZLM Roompot Tour where he was only let down with his national teammates in the team time trial where they ceded 2 minutes. To finish off this week of brilliance, Korsaeth finished 2nd in the Ronde van Noord Holland in a big bunch sprint behind Dutchman Johim Ariesen, whose build resembles that of a brick.

So who is this Truls Engen Korsaeth and why they hell should you remember his name? 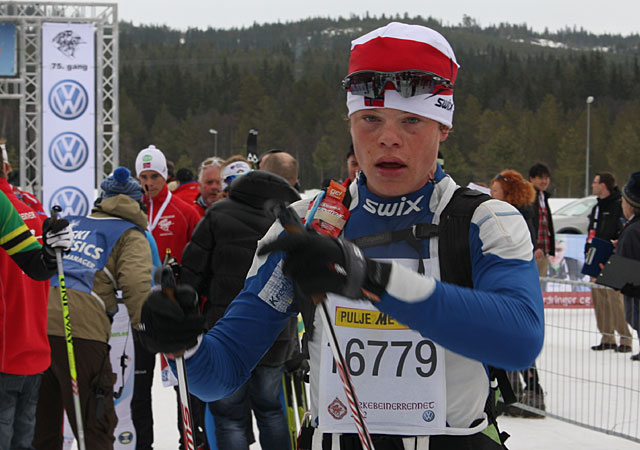 He comes from Lillehammer and his background in sport didn't start with road cycling. As with many from central Norway, skiing was his first sport. Korsaeth has competed in the famous Birkebeinerrennet multiple times and has finished in the top 200 three times, the last time of which was in 2012.


Before concentrating on the road, Korsaeth was a strong MTB rider. He rode as a junior as rode on the international level as an 18 and 19-year old with varying success. He had many races ruined by mechanicals and a chance at another World Championship after breaking his wrist in a lead-up race in Britain. He was 2nd in the Norwegian Elite MTB Championship in 2013 and was 6th in the Bundesliga U23 Bike the Rock round in 2013 as well.

Korsaeth began to split time on the road as a U23 and put out a warning shot with a 5th in the Norwegian Elite TT in 2012 as a first year U23. He moved up one spot to 4th in 2013 at just over 1 minute back from winner Edvald Boasson Hagen. He proved to be a bit skittish in the pack (not new for riders with big engines if you look to Oskar Svendsen and Rasmus Quaade) and the majority of his results came in time trials.

2014 saw the onset of mononucleosis and Korsaeth's season was derailed. He was able to come back for the tail end of the season where he finished 11th overall in the Okolo Jiznich Cech as well as winning the two-man Duo Normand with teammate Reider Borgersen. A battling spirit and a marked improvement with his pack skills.

The national team director Stig Kristiansen put it simply when he described Korsaeth as "a brutal rider." Korsaeth's background makes him set up for races with small hills and hard courses with a lot of wind. His skills in the peloton seem to be improving by the race and if he isn't feeling comfortable? Well, he will just attack.
Posted by Unknown at 2:41 AM