Contre la montre. The race of truth. One man against the road. Does anyone want to here any more overused Phil Liggett and Paul Sherwin quotes to describe a time trial? Didn't think so.

The U23 World Time Trial Championship is going on its 19th year (before it was just professionals and amateurs) and for the most part, the winners have gone on to some level of success as a pro. Success can be used in its loosest sense with guys like Markus Fothen but still, if you get a good result at Worlds then you should at least get a chance in the pro ranks.

For an example, there have been 24 riders on the podium of the U23 World TT in a ten year span from 2004-2013. 19 of them are currently professionals in either the World Tour or Professional Continental. Three others are still riding on the continental level in Dominique Cornu, Rasmus Quaade and Yoann Paillot. The former is well...doing not much while the latter two are still riding well. The only one not riding anymore is Kiwi Peter Latham, who was a significant part of the New Zealand Team Pursuit squad in 3 Olympics. The enigma of the bunch is Dmytro Grabovskyy, who was the absolute darling child as a U23, signed with Quick Step, proceeded to get a vicious drinking problem that nearly killed him, made a comeback, went off the wagon and now lives in Israel with his family and has ridden national events there. 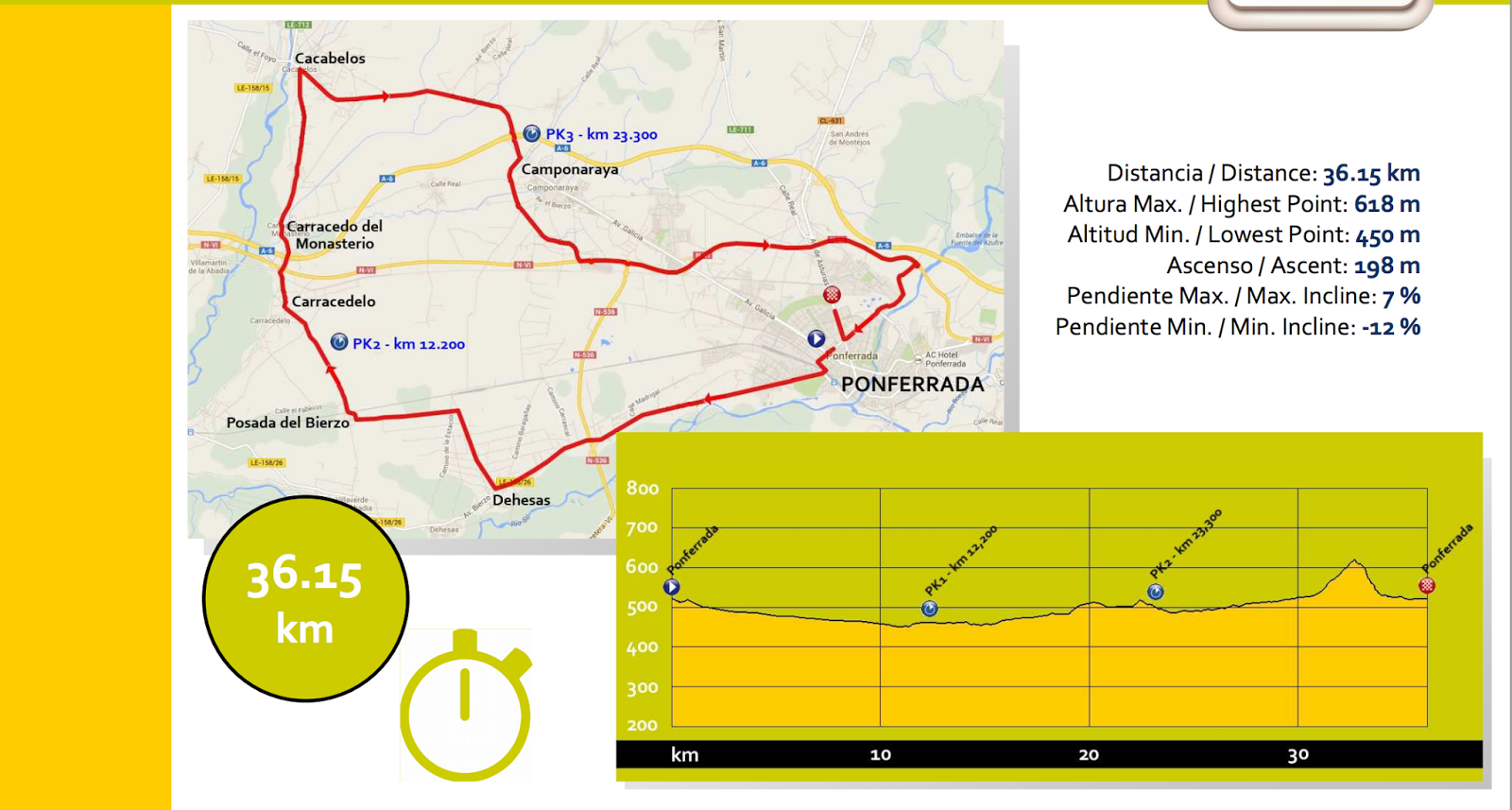 There are a few noticeable differences about this year's course compared to last year's course in Florence. First, the course is 7 kilometers shorter than last year and more technical than last year's nearly dead straight affair. Second, this course will have a climb right near the finish that might prove a little tricky for some. It hits a maximum of 7% but the climb only lasts for maybe 1 kilometer before a sharp downhill into the final three kilometers, which only features one turn about 800 meters from the line.

The contenders are going to have to be riders that put out boatloads of power in a straight line but can handle a bike reasonably well. There are definitely a few that fit the bill.

I have three main contenders for the U23 World TT Championship that I think will separate themselves from the pack fairly well. Campbell Flakemore, Stefan Küng and Ryan Mullen are my three riders that I think will set themselves apart and fight it out of the medals. The start lists are still not finalized but these three seem to be a cut above the rest. I know that is excluding riders such as Davide Martinelli, Marlen Zmorka, Frederik Frison, TJ Eisenhart, etc. but these three are my choices.


Flakemore won the rain-soaked Tour de l'Avenir prologue and finished 3rd at last weekend's Chrono Champenois, a scant three seconds ahead of Stefan Küng. Flakemore had a poor early season but has come around and is continually lauded by his teammates for his selfless attitude. Flakmore won the Chrono Champenois last year and finished 4th at Worlds in Florence, just 12 seconds off the podium.  He also won time trials in the Thüringen Rundfahrt and Olympia's Tour last year so while things have quieted down a bit this year for him, I expect him to come in with some scary good form.

Küng will be seen as the new Cancellara by some. He is the current European U23 pursuit champion, 2nd in the World Elite Pursuit Championship in Cali, the current European U23 TT and RR champion and did I mention he won a week long stage race in the Tour de Normandie? Scary fucking talented. It also might help that he is built like a truck (6'3" (1.93) and 185 pounds (84 kg)) but Küng should be taken lightly by no one in any race. He was just 3 seconds off Flakemore at Champenois and he will be hungry to stand on the podium.

Mullen will be the British Isles favorite. Yeah I'm aware he is declared for Ireland but he was born and raised in GB like many of Ireland's talents that ride under the flag. Mullen is the current Irish Elite TT and RR Champion and has been riding a lot of time trials on the British circuit including 2nd in the British 10-mile championships and clocking the 3rd fastest 10-mile in British history. Mullen missed the Chrono Champenois but for good reason as he was racing the Tour of Britain, where he finished 7th in the final TT just 20 seconds behind winner Sir Dame Sherlock Holmes Knight Brad Wiggins.

Now I'm also not a very smart man so let us look at the rest of the field then so I can cover my tracks and tell you all that I didn't forget about <insert rider's name here>.

-Davide Martinelli is the current Italian U23 TT Champion and finished 2nd to Stefan Kung at the European U23 TT Championship. He also finished 2nd in the Tour de l'Avenir prologue but he had much better conditions than winner Campbell Flakemore and others that went late including Kung. Last year, he fell quite flat at Worlds after a promising year. This year will be a test because he has had his most successful year to date but will he be able to perform on the big show?

-Frederik Frison was just out of the top 10 last year with an 11th place in Florence and had a strong Chrono Champenois this year, finishing 8th place, which was in a group within 2 second of one another including Martinelli, Eisenhart, Manakov, etc. He won the big Angreau TT this year in Belgium but he has been light on results.

-TJ Eisenhart had a great Chrono Champenois after a small training camp with Stefan Küng and BMC Devo director Rik Verbrugghe, who wasn't a bad time trialist in his day. Eisenhart was the best of the rest in Champenois with a strong 5th place but he was a good ways off Flakemore and Küng. He is just at Worlds for the TT and he will be wanting to get a top 5, if the podium is a bit out of reach.

-Max Schachmann will be looking to break into the top 10 this year as a 2nd year U23 after his 12th place last year in Florence. The German was 5th in the European Championships and will like the course.

-Steven Lammertink is the sole Dutch entry into the race but he was 4th in the European Championships (and even signed a contract with SEG Racing for 2015).

-I don't know who the Russians will be but they will be looking for a top 10 if their rider is either Viktor Manakov or Alexander Evtushenko. Manakov was 6th in the Chrono Champenois while Evtushenko is the Russian U23 TT Champ and was 3rd in the European Championships.

-Jon Dibben is coming back from a broken elbow in the British U23 TT that halted his season. He isn't always on his TT game but when he is, he is damn good. He did win the Triptyque TT earlier this year

-Gregor Muhlberger has the ability to go top 10 in the time trial and the road race after the electric season he has had. He won time trials in the Istrian Spring Trophy and the Carpathian Couriers Tour along with the Austrian U23 TT, which was combined with the Elite Men so Muhlberger also got 2nd in the Elites. He took a little summer break but seems to be in form with 11th in the 1.HC Tre Valli Varesine as a stagiaire with NetApp-Endura.

-Ukranian Marlen Zmorka has had a troubled year with the violence back home and I can understand if his head isn't in it. He was 6th in the European Championships and won a couple TTs in Italy but will he be able to rally for Worlds?

This article might be updated when I can get a fucking start list from the organizers. We are 2 days out and still nothing is official. The best I have is cyclingfever's list so thank you to them.